The popularity of Review of 8 Kid’s Books with a Character in a Wheelchair Part I was so high, we decided to do a part II of eight more books. For this review, Luda examines picture books featuring a character in a wheelchair. Some of this feedback is based on her personal experience as someone in a wheelchair, and the other is focused on the story, character, and messaging focus of these books.

Each purchase made with our affiliate Bookshop link (in the title of each book mentioned) goes to support authors, illustrators, and staff with disabilities! Books that aren’t on Bookshop have been linked to Goodreads.

All the Way to the Top: How One Girl’s Fight for Americans with Disabilities Changed Everything by Annette Bay Pimentel (2020) 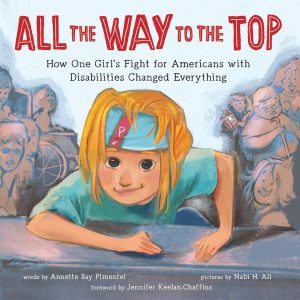 I was really excited to read this because I thought it would be empowering. Instead, I found a history lesson featuring Jennifer Keelan. The fact that she is being spotlighted is amazing, but my issue is with the story structure and overall execution of it. For starters, it is very long for a picture book. I’d guess maybe 1,500 words, and it was written almost like a textbook for kids/crossing into chapter book writing. For example on page 6, “Jennifer and her family hear about activists who are working to make sure people with disabilities have access to public places, like schools. They want to know more, so they attend a strategy meeting. Jennifer has never seen anything like it! The room is full of grown-ups with all sorts of disabilities. Some use wheelchairs. Some use canes. None of there are sitting around waiting for things to change. They’re shouting, laughing, and planning a big protest to get wheelchair lifts on buses.” There were great points where the author uses “STOP” to show inaccessible moments and the main character climbing the stairs at the end, but there was nothing that connected all these different moments into a linear story. In fact, it felt as though an adult wrote a memoir about this person’s childhood, instead of making it feel like the main character was sharing it through her eyes. The ending was also not satisfactory because the fight that had potential to be the most powerful aspect of this book fell flat. 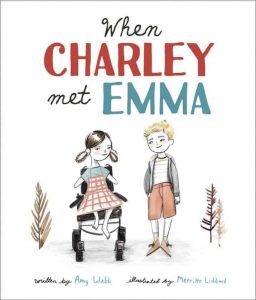 This was written for kids without physical disabilities who may have parents who want to talk about disability differences with them. This is not a bad thing, it’s great to have a book get the conversation started about someone in a wheelchair, but just like in A Very Special Critter, the parent gives the solution to the main non-physically disabled character, Charley, about: “Different isn’t weird, sad, bad, or strange. Different is different. And different is OK!” And again, it would have been better if the main character came to that conclusion on his own. Every page seemed to focus on “being different/having differences” to the point where it became preachy and more educational than an actual story. For example: “‘Some people can’t hear or speak and need to use their hands to communicate. Some people need special machines to help them walk or breathe. Some people can’t see because they’re blind and need special canes to get around.’” Additionally, placing the burden on the girl in the wheelchair to teach Charley about disabilities is problematic in the real world. The story did a great job of showing of what a child might be thinking when looking at someone in a wheelchair and no hands, but I would have liked the focus more on them forming a friendship and “showing” about disability inclusion rather then educating about it. 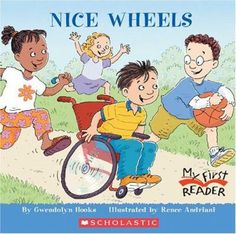 The shortest and simplest book (about 100 words) on both review lists. The story was told from a non-disabled boy about wondering if the new boy in a wheelchair could do the same things he could. And the answer was of course he could. The language, story, and curiosity of this book fits pretty well with a five or six year-old who may be wondering the same things. It’s basic and gets the conversation started for someone who’s never seen someone in a wheelchair before, but there was nothing that made this book memorable for me. 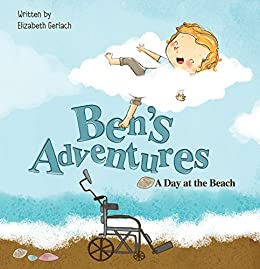 The idea and inspiration behind this book was touching, although sharing how the author/mother believed her son may have seen the world took his power away to share the story through his eyes (yes, I realize he has passed away), but that idea showcased the parent’s power to say what someone with a disability imagined as they saw fit, without the right of the child. The messaging to someone in a wheelchair of this book (and series) was damaging. For one, Ben’s adventures showed his imagined play as talking and walking despite claiming that “I can’t walk. I can’t talk. But that’s okay! I use my imagination every day.” This notion of imagining being “normal” fed into the belief that someone who was disabled, and imagined/would only enjoy life if they didn’t have their disability—the need for a “cure” and to be “fixed” played into this dangerous focus by the message of this book. Why couldn’t it show the main character in his wheelchair, not talking, and still doing amazing things with his imagination through play? It was more problematic when the second book about a circus showed him standing with his wheelchair nowhere in sight. Being able to walk and talk shouldn’t be the reason to imagine happy play for someone disabled, it should include that disability and focus on imagining flying in rocket ships (in the wheelchair) or flying in the ocean waves like a bird (in a beach wheelchair), for example.

Yes I Can! A Girl and Her Wheelchair by Kendra Barrett (2018) 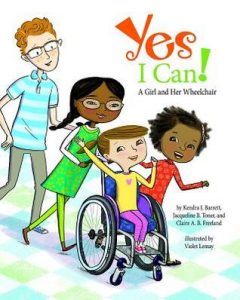 Here was another book written for kids not in wheelchairs in order to explain disabilities and how to include those different from them to non-disabled kids. There’s nothing wrong with that concept, but a picture book featuring a main character in a wheelchair should be an actual story through the eyes of that main character, and not used as an education lesson for non-disabled characters/readers. There’s a different between authentic disability representation and disability education for non-disabled folks. The entire book focused on the main character’s abilities for the first half of the book and then how she could still participate in a different way at the end. The end was where the story should have actually started and included a real theme/message other than “Yes I can!” which can be seen as problematic to the disability community because it puts the pressure to prove/show that someone in a wheelchair can go above and beyond to be seen and yet, at the end, still not be good enough. 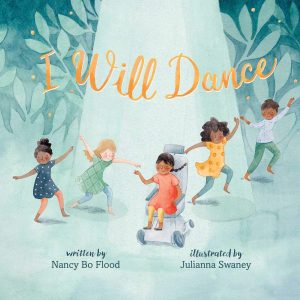 At first I was worried this book would become educationally focused on disability when it included, “I could barely breathe when I was born.” But the way it used that description/introduction of the main character’s disability worked rather well. And I appreciated this line, “Mom says, ‘Imagine you are dancing.’ I don’t want to imagine, I want to dance.” This was a great view from the girl saying what she wanted, supporting the problems I mentioned above in Ben’s Adventures. Throughout the book, the story focused on her fear of having doubts of being a dancer, but at the end and through inclusion used by others, she realized she could dance. This was also really fun to read and I enjoyed the character’s personality and arc. 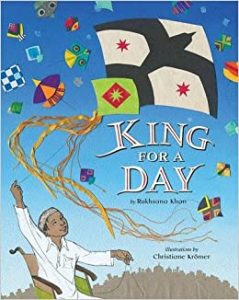 If you didn’t see the illustrations, you wouldn’t know the main character was in a wheelchair. It made me wonder if the author intended to have a disabled character or if the illustrator added that as an afterthought. Even though there was mention of other characters’ abilities, like, “On the count of three, my sister jumps.” As well as, “The bully pushes a young girl to the ground. Then he grabs her kite and runs into his house. The girl gets to her feet. “ Throughout the book, movements of people and kites were described in detail. But there was no mention of the main character sitting in his wheelchair or rolling to the edge of the roof. It was mostly him pulling and controlling the kites. It’s great when a story focuses on a story that doesn’t focus on disability, but completely ignoring it doesn’t make the story feel complete or authentic. The topic and culture of the kite tradition (Basant) was interesting to experience, but I would have liked more of a satisfactory ending. 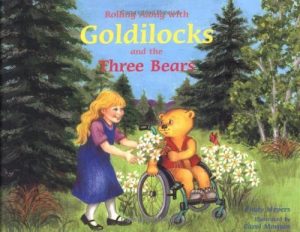 I was curious how this book would play off the original Goldilocks and the Three Bears tale. It matched the expected story of a girl going into a bear’s house, breaking Baby Bear’s chair, eating his porridge, and sleeping in his bed. The twist though was explaining to readers, which was written to educate non-disabled kids about disability, about Baby Bear’s life as a bear in a wheelchair. It talked about a sliding board, a special bed, and going to physical therapy. This concept was pretty well laid out, but I would have liked to see the focus more of the friendship of Goldilocks and Baby Bear instead of explaining to her about his disability and equipment (although, most kids would be curious about this). I also was hoping the Bear family would go on a walk to collect pine cones instead of going to physical therapy because this message of Baby Bear in the wheelchair highly focuses on him through a medical lens, which was borderline upsetting to me because I try to get away from people seeing me through that lens. However, the language didn’t devalue Baby Bear and I think this would be a fun read for non-disabled children curious about someone in a wheelchair.

We hope you enjoyed all the reviews! Do you have picture books featuring a character in a wheelchair that you like or don’t? Let us know in the comments below or on social media. #includas #IncludasReviews

Since this is a press dedicated to focusing on disability inclusion, it is important to look at books already out in the market. For this review, Luda examines eight picture books with a character in a wheelchair. Some of this feedback is based on her personal experience as someone in a wheelchair, and the other…

Writing books for children sounds fun, and it can be, but most people forget that it’s also a business. We hope these 10 tips will help you be a stronger and wiser writer. Before we begin, we do suggest first figuring out what your writing and publishing goals are. Research The Market You want to…

Hello! Luda here! Thanks for stopping by! 🙂 Want to know more about INCLUDAS Publishing and why it was started? Well, growing up and even now, I rarely saw anyone in a wheelchair (or muscular dystrophy) play a positive role (or any role for that matter) in a movie, t.v. show, or book. I’d always…

by INCLUDAS time to read: 7 min