Since this is a press dedicated to focusing on disability inclusion, it is important to look at books already out in the market. For this review, Luda examines eight picture books with a character in a wheelchair. Some of this feedback is based on her personal experience as someone in a wheelchair, and the other is focused on the story, character, and messaging analysis of these books.

Each purchase made with our affiliate Bookshop link (in the title of each book mentioned) goes to support authors, illustrators, and staff with disabilities! Books that aren’t on Bookshop have been linked to Goodreads. 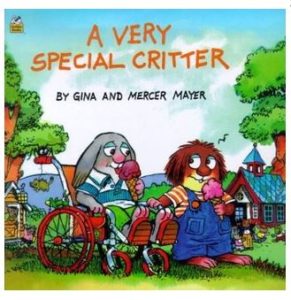 Aside from the title really bothering me (and not having anything to do with the story), I liked it. However, the first negative was in the beginning when the father was giving advice, which wasn’t the best solution. It would have been better if the main character, who said he’d never met anyone in a wheelchair before, came to the conclusion on his own–that the new critter wasn’t any different than him. Instead, the dad said on page 5: “’Just because he’s in a wheelchair, doesn’t mean he’s any different than the rest of you. He probably just needs some special help once in awhile.’ I thought that made sense.” Other than that, I liked the perspective angle of another student interacting with a character in a wheelchair. And even though the character in the wheelchair was the main story, he was not the main character. I think this shift in storytelling from a non-disabled kid worked, and it built the world of a kid who, for the first time, was experiencing what it was like to interact with someone in a wheelchair. 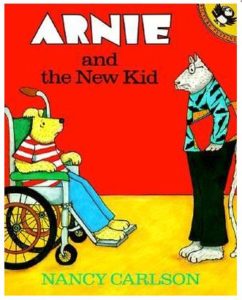 The overall feel to this story was boring and sad. The focus was more about the ability status of the secondary character and not about the relationship/friendship between the two characters. It also read like a lesson rather than a story for kids. What bothered me the most was that someone can only be friends/understand someone in a wheelchair was only if that person experienced the same issues as the person in the wheelchair, and could only include the friend in a wheelchair after the non-disabled person knows what it’s like being in a wheelchair. I prefer A Very Special Critter by Mayer over this one any day. This was so 90’s attitude of showing the interactions/world perspective of wheelchair inclusion. 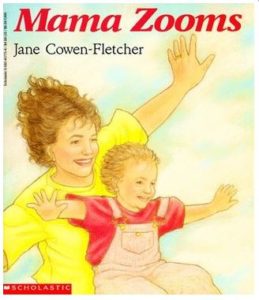 This was a very fun, sweet, and exciting read. It was filled with fun stories that made me smile, and inspired me to play like a kid. The ending/overall message was super adorable! If I had a child, this would definitely be a book I would read a loud. And then we’d create our own Mama zooms story. This was a cute family bonding time book filled with great use of imagination and creativity. 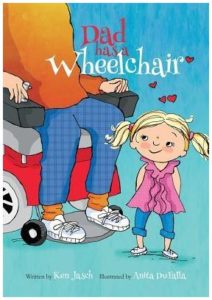 This book is told from a kid’s perspective with an educational theme to it that was all about ALS (a muscle weakening disease). My favorite part was how it was told in a sweet way from the daughter’s eyes by sharing all the things she did with her dad. The rhymes in the story were also very cute. From some research, I realized this was a family creation and put together by the actual real father who had ALS (the father has passed), and the daughter. I do like the disability aspect and not pushing it away but rather having the kid talk about it in her own way and how she loved the dad bond more than anything. This was just a sweet aspect of goodness. 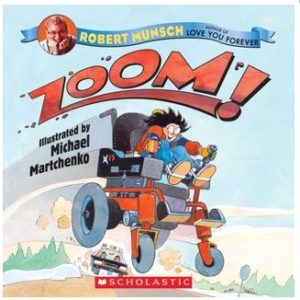 This was a bit too passive for me and the mom seemed to do all of the action and leading the story forward. It would have been more fun if the main character did all of the action (think Goldilocks). For example, on page 10: “Then Lauretta’s mother said, ‘Well, how about this? Look at this! A nice new 15-speed wheelchair. It’s fantastic. It’s purple, green, yellow. It costs lots and lots of money.’” Even though the text was weak, the illustrations are the best–they really made the book hilarious. I liked the concept because it is pretty relatable. The brother bothered me and was just thrown in there for something to happen (not well blended into the story). The ending was not very satisfying or fully developed; the main character should have led the story. 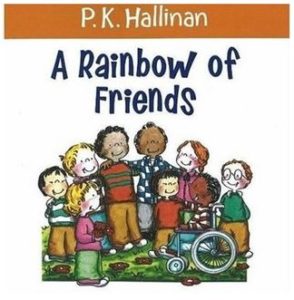 I really enjoyed this book and it had a fun rhyme book feel to it with a sweet story element to it. It also had great inclusion aspects and diversity in friends that didn’t feel forced. My favorite part was the theme of friendship and illustrations that showed a great lesson of being a friend to anyone.

Don’t Call Me Special: A First Look at Disability by Pat Thomas (2002) 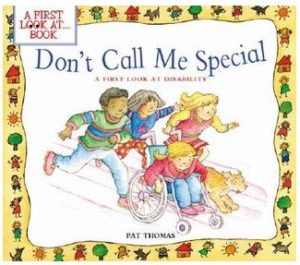 The idea behind this is great, but the execution was too adult-driven. This read was definitely not a story; more like an educated blog post in a book-form. For example: “Years ago, children with disabilities went to special schools with special teachers. Because of this people started calling them special.” I really don’t see a kid wanting to pick this book up and interact with it. It was great the book talked about being different and unique in one’s own way, and explained how to think/understand things, but was extremely preachy. An example: “When you assume, you are just making a guess. Assuming things about people can hurt their feelings and make them feel very left out.” From start to finish, each new page felt like an adult jumping around, talking about different things without a linear theme that connected all the pages together. A Rainbow of Friends by Hallinan has the same idea and was more exciting and fun to read. 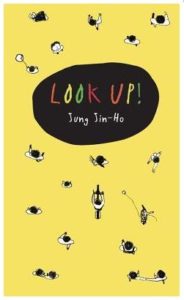 This was an interesting concept, but it felt flat to me. All in all, this could have been a really powerful book with a stronger ending if more work was put into developing the story and purpose of this book. However, I was glad this book was out there and played with different storytelling perspectives that included disability. Also, the journey of showing and not showing the main character and even her wheelchair was problematic to me and didn’t make this story memorable at all. However, I liked the high and low illustrations to show the main character’s interactions with the world.

If you want to check out the review videos, there are videos on Youtube. If you want more book reviews, you can find them in Review of 8 Kid’s Books with a Character in a Wheelchair Part II. Do you have picture books featuring a character in a wheelchair that you like or don’t? Let us know in the comments below or on social media. #includas #IncludasReviews

Writing books for children sounds fun, and it can be, but most people forget that it’s also a business. We hope these 10 tips will help you be a stronger and wiser writer. Before we begin, we do suggest first figuring out what your writing and publishing goals are. Research The Market You want to…

Hello! Luda here! Thanks for stopping by! 🙂 Want to know more about INCLUDAS Publishing and why it was started? Well, growing up and even now, I rarely saw anyone in a wheelchair (or muscular dystrophy) play a positive role (or any role for that matter) in a movie, t.v. show, or book. I’d always…

The popularity of Review of 8 Kid’s Books with a Character in a Wheelchair Part I was so high, we decided to do a part II of eight more books. For this review, Luda examines picture books featuring a character in a wheelchair. Some of this feedback is based on her personal experience as someone…

by INCLUDAS time to read: 5 min